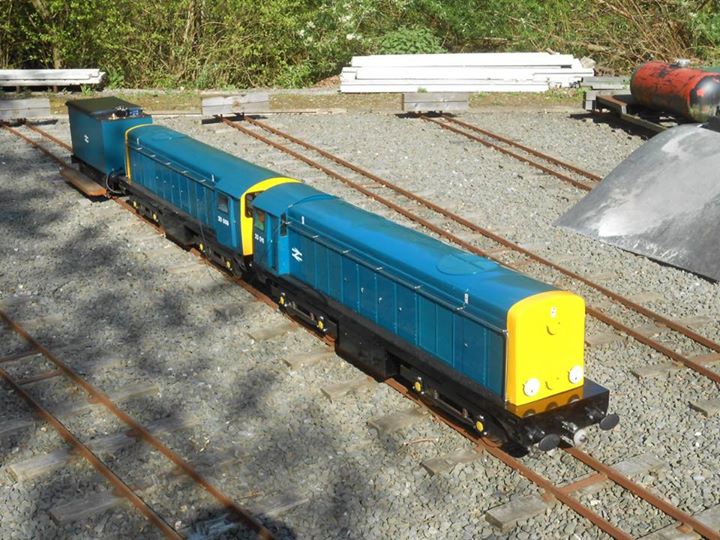 FOR SALE
BR Class 20 Bo-Bo Locomotives (One Pair/Two Locos) 7.25″ Gauge
A rare chance to buy one working pair of two Class 20 locomotives.
Each locomotive is fitted with a 1.2KW motor.
Both manufactured by AP Engineering of Sunderland.
The bodies made are of Steel sides and cab with GRP nose and roof castings. The chassis are all steel welded in construction. Fitted with Mtroniks controller and sound card although sound is only operating on the slave locomotive. (We suspect a fuse has blown in the Mtroniks unit, this may well be investigated further and repair by the time it is sold). The locos have seen light to moderate use and have had one owner since new. The locos are just over two years old. The detail is fair on the model although many commercially supplied components are available to add more detail if that is what you crave. The locos are wired together as a Master & Slave unit, with one controller fitted to the driving truck. The two locos together manage a fully loaded rake of four of our ride on coaches quite comfortably so are suited to passenger haulage. Vacuum brakes are fitted by way of a pump in the riding car. The riding car itself, despite outward appearances, is a very comfy ride.

The British Rail (BR) Class 20, otherwise known as an English Electric Type 1, is a class of diesel-electric locomotive. In total, 228 locomotives in the class were built by English Electric between 1957 and 1968, the large number being in part because of the failure of other early designs in the same power range to provide reliable locomotives.

The locomotives were originally numbered D8000–D8199 and D8300–D8327. They are known by railway enthusiasts as “Choppers”,[4][5] a name derived from the distinctive beat that the engine produces when under load which resembles the sound of a helicopter.