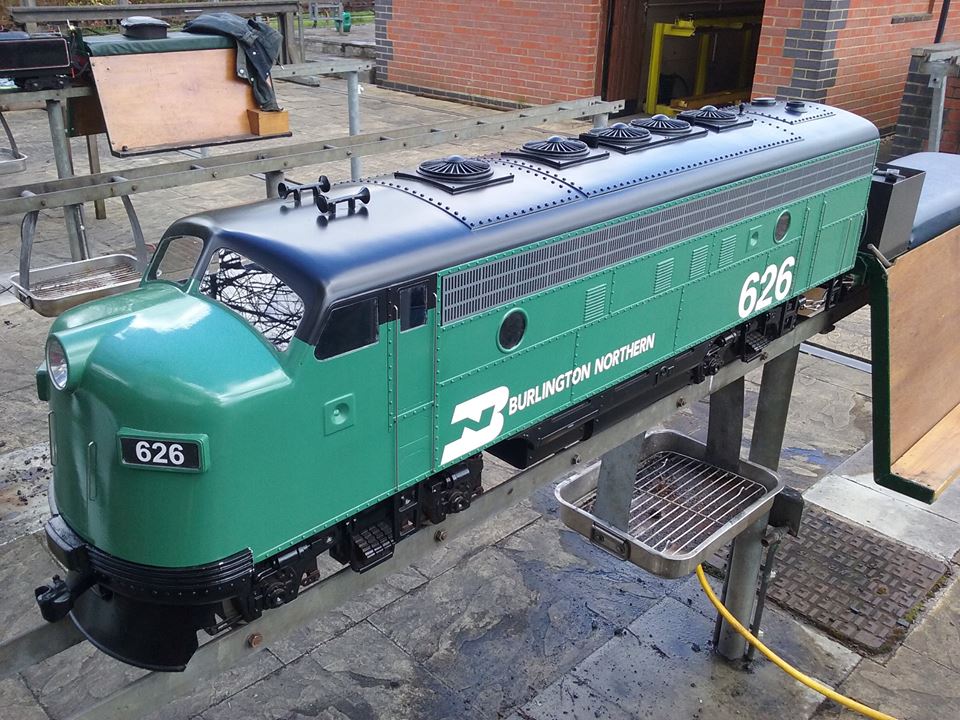 American F7 #626 – This model started life as a Maxitrak kit which was bought partly finished but then stripped down as the body was poorly done. The builder has now made a superb job and the loco is in a nice livery – Burlington Northern green. The loco has the standard, well-proven, Maxitrak chassis with 24 volt control system from 4QD driving nose. Hung traction motors – one per axle. Two tone horns and a Maxitrak sound system, there are lights but these need a socket & plug to complete, otherwise a tidy and useful model.

The EMD F7 was a 1,500 horsepower (1,100 kW) Diesel-electric locomotive produced between February 1949 and December 1953 by theElectro-Motive Division of General Motors (EMD) and General Motors Diesel (GMD).

The F7 was the fourth model in GM-EMD’s successful line of F unit locomotives, and by far the best-selling cab unit of all time. In fact, more F7’s were built than all other F units combined. It succeeded the F3 model in GM-EMD’s F unit sequence, and was replaced in turn by theF9. Final assembly was at GM-EMD’s La Grange, Illinois plant or GMD’s London, Ontario facility.

Many F7s remained in service for decades, as railroads found them economical to operate and maintain. However, the locomotive was not very popular with yard crews who operated them in switching service because they were difficult to mount and dismount, and it was also nearly impossible for the engineer to see hand signals from a ground crew without leaning way outside the window. As most of these engines were bought and operated before two-way radio became standard on most American railroads, this was a major point of contention. In later years, with the advent of the “road switchers” such as the EMD GP7, F units were primarily used in “through freight” and “unit train” service where there was very little or no switching to be done on line of road.